Getting to the Root of Oily Water Separator Challenges 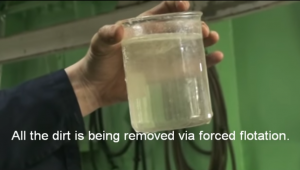 Discharging oil overboard illegally remains a concern for any vessel operator and almost every marine engineer is familiar with or has at least heard about the “magic pipe.” Oil discharges have resulted in significant fines and imprisonment, making the treatment of bilge water an essential part of any engine room operation. Annex 1 of MARPOL says that any direct discharge of oil or oily water mixture into the sea is prohibited. The regulation goes on to explain how an oily water mixture must be treated onboard  before being discharged.

If bilge water is required to be treated and oily water separators are required on all vessels >400 GT, what causes the system to malfunction?

Oily Water Separators (OWS) treat bilge water for compliance with MARPOL Annex 1, but many vessels cite challenges with keeping them in good working order, increasing the risk of a nightmare oily water discharge scenario. Many systems on the market rely on a centrifugal process and/or filters, both of which require significant long-term maintenance and investment. Centrifuges operate under high pressure and high temperature, both of which are harsh on the system components, including the oil content meter, and overtime the costly filters must be replaced

What breaks down OWS systems performance? Emulsified oils are one of the main causes of OWS’ not performing optimally, so frequently, in fact, that it is specifically noted in MARPOL regulation MEPC 107(49) that emulsions must be dealt with by the OWS. Emulsified oils are microscopic, yet can wreak havoc on mechanical parts and systems. Several of the most common OWS systems address emulsions by filtering out the emulsified oils. These filters must be incredibly fine to catch the microscopic emulsions, which are <100 nm in size, and thus easily clogged, resulting in improper function and even complete loss of effectiveness.

The Marinfloc CD OWS system deals with emulsions differently, with no fine filters or centrifugal components. Marinfloc CD systems are designed to address emulsions with flocculation, a process widely used in wastewater treatment on land. Flocculation is a chemical process in which a chemical agent is introduced to the wastewater (in this case the oily water on board) to suspend the target compound in the form of flakes (or flocks) on the surface. The target compound is suspended in a liquid, not dissolved, and the resulting “flocks” are easily removed, resulting in separation of the target compound from the wastewater. Flocculation is reliable and cost effective. The only consumable cost is the cost of the flocculant agents, which can be readily sourced in the marketplace. The average cost for 1,000 liters of treated bilgewater is approximately $3.50 USD. The Marinfloc CD system is certified by all major classification societies and has a certificate for 5 ppm by DNV-GL, well below the MARPOL requirement of 15ppm, while also meeting the lower levels set by most green initiatives.

For technical specs or more information on the chemical flocculation process, please contact sales@tms-fla.com. To see how it works, check out this video.

Ports and jurisdictions around the world are increasingly banning open-loop EGCS (Exhaust Gas Cleaning Systems) from being used to comply with International Maritime Organization (IMO) restrictions on the maximum allowable sulfur content in marine fuels.  As of June 2020, open-loop EGCS or scrubbers are banned in parts or all of China, Singapore, the European Union, the Suez and Panama Canals, and the United States. Several ports in Korea, and many ports in the United Kingdom also ban open-loop scrubbers.

According to MARPOL Annex VI as of 1 January 2020, vessels must use fuels with a sulfur content of 0.5% or less or use an alternate means of compliance. Vessels are able to comply by using an EGCS. The controversy surrounding scrubbers relates to the washwater byproduct of open-loop systems.

Open-loop EGCS take in seawater, spray it into the exhaust, and discharge this “washwater” overboard.  Closed-loop EGCS on the other hand, use alkaline-dosed freshwater onboard to spray the exhaust, then then filter the water to be recirculated.  Only a small amount of water is discharged, but the particles filtered out need to be scraped or pumped out and disposed of on land.  Open-loop scrubbers do not require large holding tanks or heavy equipment, making them less expensive to install and operate, and thus account for about 80% of scrubbers installed on ships.  A third option, hybrid scrubbers, allows vessels to alternate between closed and open-looped operations depending on local guidance.

Marine fuel is a significant expense for deep sea vessels, and in many cases low-sulfur fuels are not cost-effective for fleet operations. EGCS represent a way for vessel owners and operators to be compliant with the regulations, while also controlling costs. Unfortunately, there is much controversy surrounding how polluting the washwater from open-loop scrubbers might be. There are some parameters this washwater must meet, such as PAH and turbidity limits, but there are other aspects of washwater that are not yet regulated.

Bans on open-looped scrubbers seem to be quietly communicated by local authorities, making it difficult for vessels to know in advance whether an open-loop system is permissible.  In the United Kingdom for example, ports have banned open-loop scrubbers individually, so while no national ban exists, vessels are unable to use them at many ports in the United Kingdom.  Other jurisdictions have not issued formal written guidance banning the use of open-loop scrubbers, despite verbally indicating to Captains and operators that such scrubbers are not permitted.  Verbal or email notice can serve as enough regulatory guidance to allow for port authorities to write up a deficiency, costing the vessel time and money.

Cutting through the Confusion

Staying up to date on scrubber regulations can be a challenge, but it doesn’t have to be. Ocean Guardian, a digital environmental compliance tool, includes the latest official EGCS regulations and guidance from around the world.  Regulations are verified and vetted by a third-party maritime law firm before being deployed to clients and updates are rolled out instantly to connected tools worldwide. Ocean Guardian also allows flexibility for operators to include verbal or emailed instructions from specific port authorities and jurisdictions in the company policies section, when formal written guidance is not available.  For a demo on Ocean Guardian, please contact sales@tms-fla.com.

We officially launched Ocean Guardian at CMA Shipping 2017 to a great response. Cruise Industry news picked up the story, which can be read here.

Where Does Maritime Environmental Regulation Come From?

As a boater, it is your duty to ensure you’re always within compliance for every one of these regulators. Environmental regulations exist for good reason – to minimize the negative impact on our marine environments. In most cases it is punishable by law to act against these environmental safeguards – not knowing is not a valid excuse in the eyes of the law.

We understand that staying compliant can still be a little tricky due to the nature of regulations. Regulations change often as new legislation is made and new research and data point to new needs requiring attention. This is part of what we do here at Total Marine Solutions. We take care of all of the research and stay on top of all new regulations so you don’t have to spend time figuring everything out. We can provide you with up-to-the-minute details on both environmental and safety regulations to keep you comfortably compliant! Our aim is to help the environment while helping ship owners and operates meet regulations in ways the most efficient ways for their businesses.

International Convention for the Safety of Life at Sea (SOLAS)

International Convention for the Prevention of Pollution from Ships (MARPOL)

Regulations for Emissions from Marine Vessels